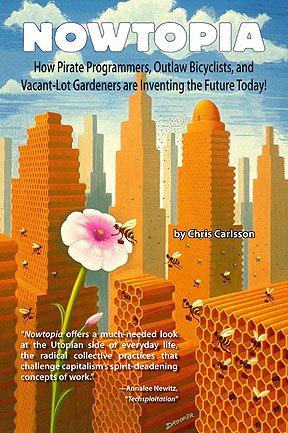 Nowtopia is a book about a new politics of work. It profiles tinkerers, inventors, and improvisational spirits who bring an artistic approach to important tasks that are ignored or undervalued by market society. Rooted in practices that have been emerging over the past few decades, Nowtopia’s exploration of work locates an important thread of self-emancipatory class politics beyond the traditional arena of wage-labor.

Outlaw bicycling, urban permaculture, biofuels, free software, even the Burning Man festival, are windows into a scarcely visible social transformation that challenges politics as we know it. As capitalism continues its inexorable push to corral every square inch of the globe into its logic of money and markets, new practices are emerging that are redefining politics. In myriad ways, people are taking back their time and technological know-how from the market and in small under-the-radar ways, are making life better right now. In doing so, they also set the foundation—technically AND socially—for a genuine movement of liberation from market life. The social networks thus created, and the practical experience of cooperating outside of economic regulation, become a breeding ground for new strategies and tactics to confront the everyday commodification to which capitalism reduces us all.

Nowtopia uncovers resistance and rebellion amidst fractions of a slowly recomposing working class in America. Rarely self-identifying as mere ‘workers,’ people from all walks of life are doing incredible amounts of work in their “free” “non-work” time. This unpaid work is creating immediate practical improvements in daily life. More interesting still, these myriad initiatives constitute a more thorough-going refusal of politics and economics as usual. In Nowtopia, Marx’s concept of the General Intellect is freshly applied to the disparate initiatives that are percolating largely out of public sight. Building on the investigative methodology developed by autonomist Marxists in Europe and the U.S.A., Carlsson recontextualizes the so-called “middle class” as an example of working class recomposition. The practical rebellions outlined in this book embody a deeper challenge to the basic epistemological underpinnings of modern life, as a new ecologically-driven politics emerges from below to reshape our assumptions about science, technology and human behavior.

The semi-conscious war between these life-affirming, self-emancipating behaviors and the coercive domination of money, property, and survival amidst contrived scarcity is the core investigation of this book.