I’ve been riding my bicycle in San Francisco since 1978 when I first arrived. I had cars from time to time over the years, but have been happily car-free since the late 1990s when my daughter got her driver’s license. I am not a purist by any means, so I borrow and rent cars once in a while, but basically I’m a daily cyclist. Back in the 1980s it seemed like all San Francisco bicyclists knew each other and we’d usually wave and say hi when we passed each other on the street. It was easy to ride for blocks seeing only one or two other cyclists at most, quite a contrast with today’s impressive density of bike traffic. How did it change so dramatically? A lot of people put a lot of work into the usual channels of lobbying and campaigning for municipal policy change, but I argue that Critical Mass is the single biggest reason why there are so many more people on bikes now. When we started it in 1992, there weren’t 5-25 cyclists piling up at every redlight going home on Market every night. The SF Bike Coalition was a tiny all-volunteer group meeting once a month in the back of a Chinese restaurant in the Sunset. It would be years before they became the political behemoth some consider them to be today with thousands of members and ready access to local politicians. 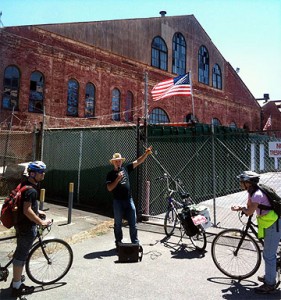 Talking about labor history in front of the oldest industrial building west of the Mississippi, the old Pacific Rolling Mills at the Union Iron Works.

Anyway, in October 1993, after Critical Mass was a year old and had reached its first 1000-strong ride, I decided to broaden the effort by hosting a “cultural bike tour” of the community gardens of southeast San Francsico. It was a clear, brisk, sunny Sunday and we had a lovely 5-hour ride covering about a dozen gardens from Bernal Heights down to Bayview, through Visitacion Valley and up to the Crocker-Amazon district. From this inaugural event grew the Shaping San Francisco bicycle history tours, as well as the SF Bike Coalition’s ongoing cultural rides. It felt easy and logical to combine my interest in local history with my love of bicycling around the city. After lying dormant for the first half decade of the 2000s, we started the bike tours up again in 2006 and they’ve been going strong since then, usually 5-7 per season (spring and fall).

My personal passion has always been labor and ecological history, so those are the first tours I started giving. Since then I’ve expanded them to include Transit, Dissent, Food Politics, and we even go out to the cemeteries in Colma around Halloween to see where all the dead bodies are buried! There’s nothing like rolling around on a bicycle to get a feel for the original landscape, though it does help if you’re with someone who can tell you some stories, and unpeel the layers of history as you pass them by…

“Just returned from the walking tour called South of the Slot, which was expertly led by Chris Carlsson and LisaRuth Elliott. I have been a resident of SF for 30 years, and have participated in dozens of historical walking tours. This one is surely one of the best. I learned more about SF social and labor history in 2 hours than I had in several decades. Chris and LisaRuth are extremely knowledgeable about everything from sand dunes, to Filipino history, to sacred grounds of the Ohlone Indians. I highly recommend this tour, and any other they are likely to lead in the future.”

Here’s a Lonely Planet review, and another enthusiastic endorsement from June L, an employee at the travel booker Vayable:

I learned so much about how things were!

Chris took us back to a place where there were bustling harbors full of imported food, horses dragging tons of bananas down streets, mayonnaise factories in place of coffee shops, and large-scale bakeries in place of modern office buildings. It was a smaller world both literally, since much of the current coast was under water, and in spirit. The hustle of the industrial SoMa district has now settled down into quiet re-purposed warehouses and condos, but you can still see traces of the past when you peel back the paint with a local historian. 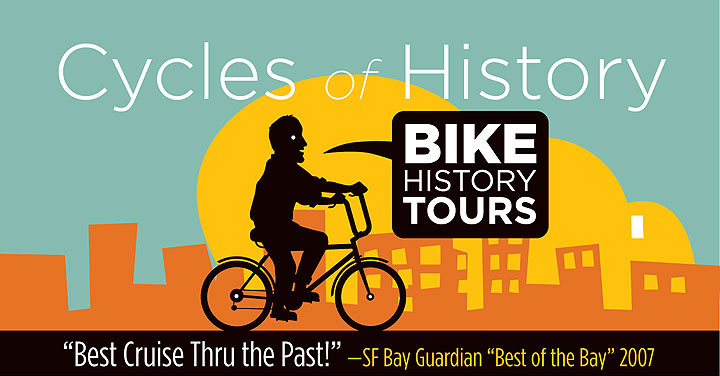